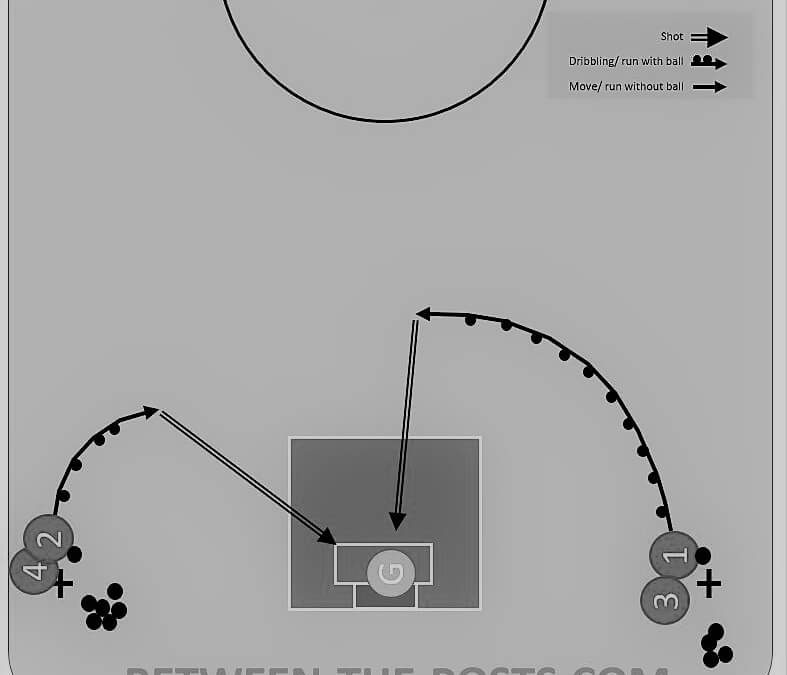 This exercise helps you to be in position when a shooter shots from mid-distance towards your goal. It is very useful to train knee steps and forward movements in a game-like situation. Furthermore, the exercise trains your scanning. Identify when a striker shots and increase the depth immediately to increase the cover ratio of your body towards the goal.
How to do it?
We assume that the field player in the right corner starts with the exercise
Summary
This exercise is nice game-like situation. When you train this exercise, ensure that your short post is not open. We ask all strikers to shoot immediately as soon as a goalie offers you it – it is the best way to keep it close ;). We recommend you to move parallel to the striker in a semicircle around the goalkeeper area. This has two advantages. The first one is that you are on angle with less movement. The second one is that you know better where your goal is in the back. If you do not believe it, try to move in a semicircle at the edge of the slot. You will see that it is much more difficult to be on angle and of course it costs more energy to follow the movement of the striker as you have to move a longer path.
Post Views: 154
Share
5