As it is our one year anniversary this week, we also try new things like #throwbackthursday. Regarding floorball goalie stuff, we wanted to take a look at some older equipment. So luckily we got some old pants and a jersey from Unihoc, which we can test and compare to our own new equipment from Blindsave. Everything written down here is based on own experience. We as goalies and humans are individuals. So maybe some of the old equipment might be the best ever for you and vice versa. But now let’s have a look at what it felt like :)

The size of both pants are XL. Jerseys are both size L. The diffrence in the cut can be seen in the picture underneath. You can see that the cut in the Blindsave Gear is wider, to make the goalie look bigger. This actually shows some kind of evolution in the development of floorball goalie gear. Click on the pictures for full resolution. 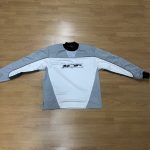 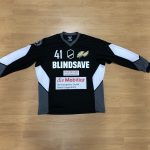 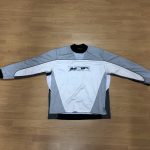 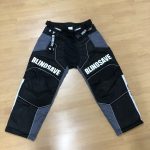 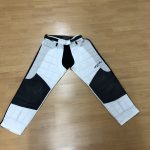 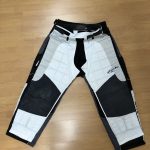 In the following video we tested how fast you are over a distance of 5 meters. We went through the three different styles of movement: knee steps, pulling and pushing. To make a difference visible, we stopped the time. Note: The floor was pretty slippery, which results in faster movements, but also less grip for the shoes, which increases the difficulty for the pushing and pulling movement. In the video below you can see the full speed test. Unfortunately, the Pull Movement footage for the Unihoc gear got lost.

The Saves after Movement Test

So this is a nice drill in general for goalies to work on reaction and movement. The shooter gives a starting signal (here he knocks his stick on the floor) to the goalie facing a different direction. The goalie then moves to the shooter and the striker shoots. Here we tried to test the width and the speed of the gear. Of course there are some factors you do not have an influence on, like quality of shots or how well the goalie is warmed up. Anyways, if you can test new gear, with this drill you can get a good feeling for it. The video below shows the how the test went.

Safety is a really important factor to us goalies, e.g. some like to have protected arm sleeves and some even play in a T-Shirt. Anyway, here we tested the padding in the sleeve and in the pants by shooting at it. As the Unihoc jersey had padded arms you did not feel any pain after the shot. After the shot through at the unpadded sleeves of Blindsave jersey, you would experience a little mark. For the pants it was vice versa, you could fell that you got a shot on your upper leg in Blindsave pants, but it actually hurt a bit through the Unihoc pants when the shot hit. In the video you can see the test and the “results” ;)

Comparison of Size in the Goal

This one should show how big you look out of the ball’s persepective when you are in the initial position. Looking at it, we can see some difference in the sleeves, which look bigger at the Unihoc jersey, maybe because of the padding. Also due to the paddings, the shoulders look more hanging in the Blindsave jersey. Therefore, the Blindsave jersey seems to be bigger between arms and torso. Looking at the pants, the Unihocs look way smaller than the ones from Blindsave. Also the fifth hole looks better covered. For the whole suit we can say that the waist looks bigger when wearing the Blindsave gear. Make your own opinion by looking at the pictures below. By clicking on the pictures you'll get full resolution. 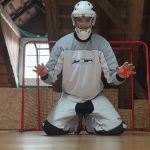 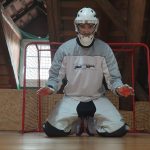 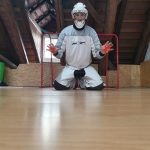 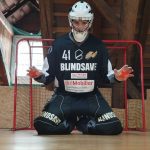 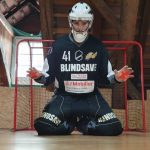 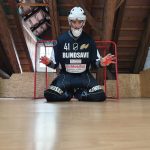 Summary of the Test

The following table should show you a quick overview of the tests and the results:

So this part is mostly about feeling and just reflects the personal opinion. It can not be applied to everyone’s playstyle or preferences when it comes to goalie gear.

After the actually pretty short training session in both suits, I would say that I sweated way more in the Unihoc suit than in the Blindsave Suit. This must be due to the very well padded arms, which I personally liked a lot. During the season I went to some trainings in the Unihoc jersey and was pretty satisfied with it. But this comes mostly from me liking higher tempratures while doing sports than being cold. Little downside for the Unihoc jersey: You can’t roll up the sleeves very well, also due to the padding. For the Blindsave jersey I can say that I like its lightweight fabric a lot but I was kind of missing the padding. The solution to this problem is actually wearing a long sleeve protection vest, but this depends also on your preferences and your style of playing.

The pants from Unihoc felt a bit weird. Maybe they need more time to get used to it. When I felt pretty save taking shots at my arm in the jersey, I felt pretty uncomfortable getting shot at my upper leg. As they weren’t padded so much, they were pretty lightweight and felt less heavy than the new ones from Blindsave. Moving was still a bit uncomfortable and maybe the fabric stopped me a bit, as it was already used a lot. This was the advantage of the Blindsave pants, as I was used to them more and that they felt more slippery. It was a pretty fun experience to test some products, even though I basically had no clue at what I should look at. So we just did some tests, some more relevant, some less. Personally we would like to test more products from different brands, but this would become pretty expensive and we also do not want to talk bad about companies and their products. Also the different playstyles and preferences for each individual are key factors in this case. Anyway, this was great fun and we had the chance to have a little look at the development of floorball goalie products, which is something we love doing.

A special thanks goes to Arbnor Nov for helping filming and shooting (I know you love shooting at my arm xD) and to Joel Zimmerli for the old Unihoc pants. Without you this video would not have been possible!