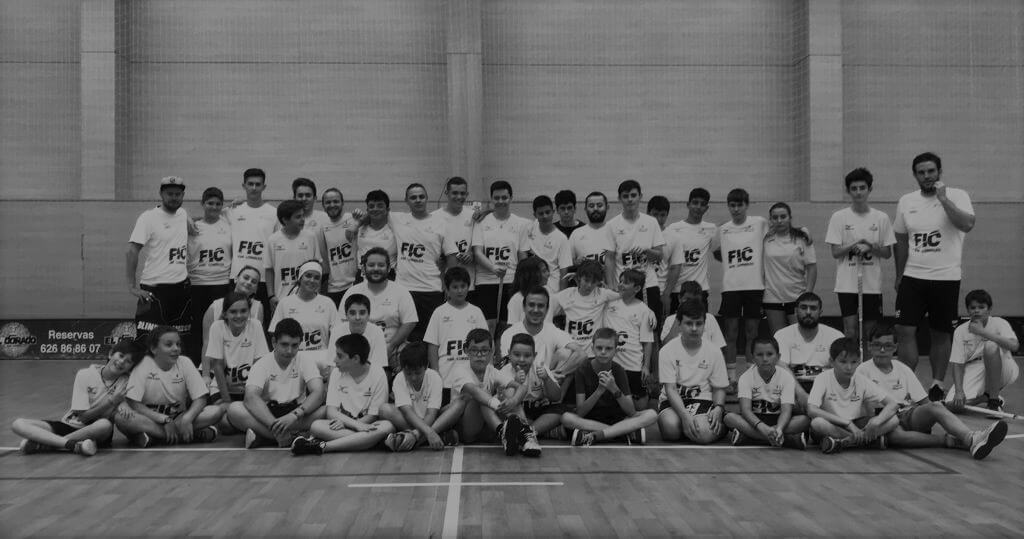 This year, I (Lars) had the honour to be one of the coaches at the Floorball International Camp (FIC) in San Lorenzo, which is located around 50 km North-West from Madrid. In total 50 passionate floorball players plus 6 coaches trained from Tuesday to Sunday between 9:15 and 19:00. The kids between the age of 6 to 12 started directly at 9:15. In parallel to the shooting training for most kids, I started to teach the young goalies the basic position and movements such as knee steps, push-and pull movements during the first two hours of the day.

At 11:00, the adult course started and the kids’ group moved from the game court to the side lines to improve its stickhandling or hand-eye coordination skills with guidance by two coaches. This took around one hour until they left the sport area to take lunch at a restaurant on the other side of the street. The breaks between the training sessions for kids and adults are slightly shifted so that kids have a second slot to train on the game court while the adults are taking lunch.

The main spoken language at the camp was Spanish, which leads to the fact that I needed a translator from time to time for the kid’s course, as it was not possible to explain everything with body language. For the adult group, this problem did not pop up as every player spoke fluent English.

In the following sections, I would like to show you the schedule for the goalies at the FIC in San Lorenzo. In this case, I will focus on the lessons/exercises that I prepared for the 8 adult goalies. Please note that this was only a part of the daily goalie workout, as the other coaches included the goalies in their shooting exercises as well. Therefore, it was a very good mixture between theory, training single movements and acts, exercises outside/ without the goal and exercises with a high frequency of shoots.

Each big journey starts with a first step.
Let’s talk about movements. The first lesson started with a small discussion on movements and the following questions: We discussed each movement and analysed our own movement during a short practical exercise.
After the first theoretical block, we practiced the different movements in several exercises. On the one hand, we focused on fast direction and movement changes. This contains the ability to switch from one movement to the other as well as to be in a balanced position and feeling comfortable to act in both directions with the same reaction speed – this requires a balanced basic position.

In summary, you can say that the first day was all about movement. Movements are the foundation for a success goalie why it is that important to train and analyse them repeatedly.

The second day started with a small hand-eye coordination warm-up that each goalie can adapt this for his weekly training or pregame preparation. It takes about 15 to 20 minutes and needs up to 2 floorball balls. Afterwards, I split the group into teams of 2 and set up a small hand-eye coordination circle. The aim of the different exercises were to bring the goalies in an uncomfortable position due to fast movements or losing the ball out of his view for a short period of time. In the rarest cases, we are in a comfortable position in the goal to parry the ball. Hence, it is very important to train during pressure situations.
After that, we had a lesson on positioning and talked about the right positioning regarding arm, knee and upper body position, as well as the right distance to the goal for shots from different areas of the field – 7 positions around the goal. To visualize it even more, we used robes to mark the space that has to be covered.
The last goalie focused exercise of the day combines the already learned components of goalkeeping - rebound control. One property of rebound control is to catch the ball after you blocked the first shot with your body. This whole process contains a movement towards the shooting striker (Movement) to be in position (Positioning) and grab the ball as fast as possible (Hand-Eye coordination) after you saved the first shot with your chest.

“Think outside the box” – goalkeeper training is not only limited to parry the balls between the posts, it is even more. Day 3 started with a small cardio strength warm-up be awake and increasing the heart beat a bit. After some lunges, squats and other power circle related exercises, we started with an extensive mobility lesson. We mobilized our hips and the lower part of our body and continued with a shinbox workout. At the same time, I always connected the movements the floorball goalkeeper movements. A good example for the use of the shinbox is the scissors kick. The starting position of it is the shinbox!
That’s why we continued with the scissor kick afterwards. After a short introduction about the exact movement and its advantages and disadvantages, we trained the scissor kick in combination with rebound control. This ensures that our movement does not stop after the kick. You have to consider, that the position after the kick is very uncomfortable and limits our radius of movement.

The fourth camp day can be summarized by repeating one word three times: shots, shots, shots. After a small hand-eye coordination and mobility warm-up, 8 floorball goalies shared 4 goals and the strikers trained its different shot techniques from different angles and frequencies. My focus on that day was to watch the goalkeepers and give them tips for improvement. The last exercise before the daily 60 min match was a penalty competition.

Within the last four days, we trained the correct movement, to get in position, to save the ball and to control the rebound. Now, we want to train the next step – release a counter attack with a long throw out. Therefore, we have focused especially on the shoulders during the warm-up. Afterwards I explained the technique of a long throw out which bounces off the ground to avoid that an opponent player blocks and after the theory always comes the practical part.
Afterwards, we adapted the technique to even do fast and flat throw outs, which do not bounce on the floor. Afterwards, the technique should be proven in a small game as well. The goalkeepers were divided into two teams and the task was to throw down three balls of obstacle cones by a wide throw.
To recover the shoulder after 1000 throws, floorball goalies and field players played aqua floorball outside on a prepared field with small goals – no injuries ;-).

The last day was a free spot and we decided to use it to train two situations: Now, after almost six days of training, we finished the camp with final game coaches against the students.
Overall, I am very happy that Dioni gave me the chance to be one of the coaches at FIC in San Lorenzo this year. It was a lot of fun to train every single goalie and explain them my understanding of floorball goalkeeping. The days were well structured and the long break during lunch “Siesta” – to avoid the midday heat on the court – was used for lunch and a cool down at the outdoor pool directly near the court. Besides the training, all people were very friendly and big thanks again for the sightseeing tour in San Lorenzo and the “hiking” on top of the mountain.
Post Views: 142
Share
6