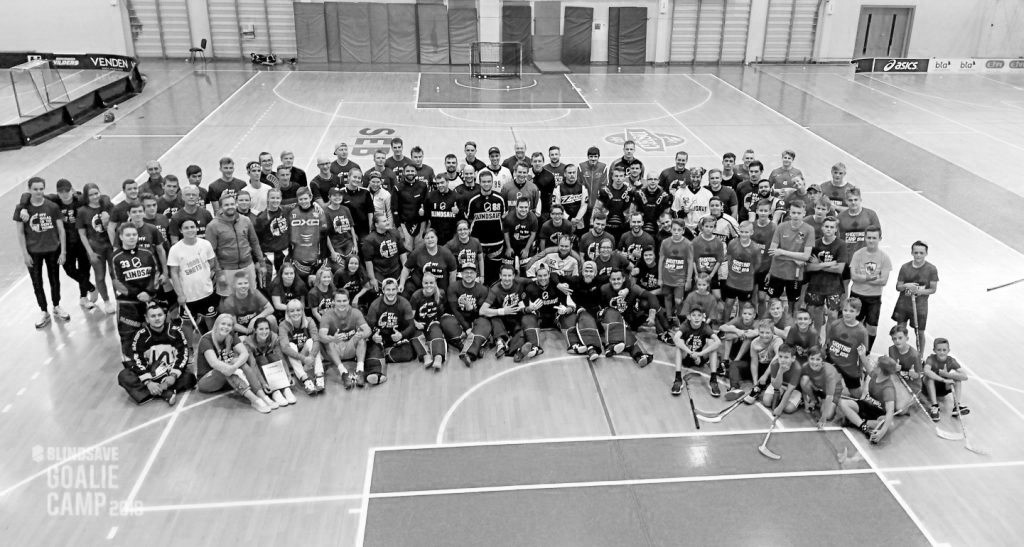 The Blindsave Goalie Camp is the biggest Floorball Goalie Camp in the world with more than 100 goalies participating from every corner of the world. The whole camp has a duration of three days and starts on a Friday for goalies with the age of 16 and older. Once every goalie arrived in Riga around noon, a chartered bus brings us to Ce¬¬sis where the camp happens – around 2 hours drive.
Due to the many goalies, we were distributed into 4 groups with up to 16 goalies – sounds a lot but each exercise has several goals and you will get your time between the posts. In addition, each exercise has up to 3 goalie coaches which means that you will get a lot of feedback and hints to improve your goal tending. The exercises of the three day schedule this year was very various. It contained lessons about a good warm up for goalies, explanation of movements, positionings and a theoretical discussion about the new IFF penalty rule with Patrik Åman (read our post).
One big benefit of this camp is that at the same time the Klubbhuset Shooter Camp happens in the same sports hall. This means there are a lot of strikers who love to score against foreign goalies. Basically, both camps work hand in hand to get the best out of it. There are some exercises where a certain movement of the goalie is the focus. This means a low frequency and more or less always the same static movement of the striker. This situation changes when we as goalie have to be a part of a shooter exercise. There is a high frequency and you will be glad that you have to share your goal with few other goalies to rest for a few minutes.
Goalie coaches were Amanda Hill, Patrick Aman, Pontus Boman, Andis Blind, Henri Toivoniemi, Aake Kettunen and Latvia’s national team goalie Janis Salcevičs. This year was the second time that we visit the Blindsave Goalie Camp. The first one was last year and we learned a lot about the understanding of goal tending and the basic skills. Therefore, the biggest question for us was: “Do we learn anything new or is it just a copy of the last one?”
The answer is not that easy, maybe we could say there was 80% new, 20% copy. The agenda was the same as last year, which is good, because like that we had the most trainings possible. Also, some of the exercises were the same as last year, so there really was a kind of repetition in it. But is that bad? Not at all, at least in our opinion. There were way more new things we learned, be it exercises, special drills, a new training method or something else. We benefited a lot. That some things will be repetitive is only logical. E.g. basics have to be repeated every time. And some drills seem to be pretty effective, so why don’t do them again? Also, you can’t come up with something completely mind blowing every time. And anyway, you have the chance to get trained by some of the best coaches and (former) goalies in the world, what do you want more?
Anyway, for 200 Euros (special price for returners, first timers pay 225 Euros) this is a great camp. These 200 Euros also include food and accommodation for three days. We don’t want to talk about food specially here, because everyone has a different taste. We just want to point out that there was maybe a lot of rice. But don’t worry, there is a supermarket around the corner, so you won’t starve. Accommodation was really great. We had two to four bed rooms and it was located close to the sports hall and Cesis downtown. And don’t worry phone addicts, there is free WiFi. To go out of our comfort zone (or at least some of us), we visited a tree-climbing park on Saturday. To call it a day, there was a big BBQ at the end of the park. After that, you still had the chance to go to the town if you wanted to.
To conclude, this was a great camp. Maybe even better than last year, looking at accommodation, organisation and specials (tree-climbing park) only. You have to know, it is not only training with some of the best coaches and (former) goalies in the world that makes the camp so special. It is also the atmosphere, the people with same interests and intentions you meet and the amazing community of goalies that meets once a year in Latvia.
All pictures of this post are made by Blindsave. More pictures are available at their flickr homepage (link)